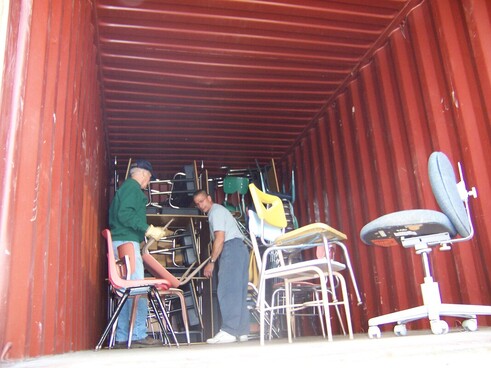 ​Over the past 20 years, CHOW collected desks from area schools who had replaced them through the Ohio Schools Facilities Grant.  Volunteers picked the desks up from schools and took them to storage either in Cortland or Austintown.  When there were about 200, enough for a forty foot container, the paperwork was started to apply for transportation which was paid for by the federal government through the Department of Defense.

CHOW worked closely with Dave Gallardo, who has contacts in many Central American countries. Gallardo formed the contacts while he served in the Air Force and worked with New Horizons, a U.S. military program that builds schools and clinics. His job was to ensure that the schools and clinics had the necessary equipment in place before turning them over to the different countries. It is important that a responsible contact in each country accept the shipment to ensure it arrives at the assigned destination. Dave translated the paperwork into Spanish for the receiving country as well as worked with the Department of Defense to secure funding for transportation.

​PARTNERING WITH DREAM BIG HONDURAS
In 2015, CHOW members had the opportunity to partner with Dream Big Honduras and extend their assistance to a group in need of the supplies CHOW has found the means to collect. Just after CHOW had sent a shipment of desks to Panama, depleting the warehouse supply, CHOW members learned about an organization in Butler, PA, that needed desks for a school they support in Pinalejo, Honduras. Dream Big Honduras volunteers had just finished building a new classroom for the school and needed to furnish it, so the two organizations coordinated their efforts to meet the school’s needs.

Desks have been hard to come by in recent years because schools that were getting rid of them had been having auctions, during which scrap dealers bid on whole classrooms of desks and took them to the scrap yard for money.  It was hard to compete with that. Without any leftover desks to accept as donations at the ends of auctions, CHOW volunteers needed to come up with a different way of getting the desks necessary to fill the needs of the schools CHOW strives to serve.  CHOW volunteers bid on an auction at Beaver Local Schools and successfully won bids on over 350 desks for less than $100!
God’s hand was evident in each step of the process to this point, and faith was strong that His presence would be felt as CHOW volunteers continued the shipment arrangements. Once the desks were gathered, the next step was to apply to the Department of Defense (Funded Transportation) for transportation. The transportation application was promptly approved.

Dream Big Honduras volunteers usually personally transport suitcases full of the clothing, flip flops, and medical supplies they collect to take to Pinalejo. However, in an effort to transport a greater number of donations in a single delivery and to save them from having to pay for the extra luggage, CHOW agreed to include their donations in the shipment. On loading day, Dream Big Honduras delivered 93 boxes filled with donations, which CHOW volunteers loaded onto the container, along with 64 student desks, 6 boxes of student supplies, 14 boxes of teacher supplies, 2 delivery units, 3 exam tables, an exam light, an x-ray panel, 2 baby scales, 26 soccer balls, and 4 pumps.

The donations were delivered January 20, 2016. What an exciting day it was for the people in Pinalejo!  They sent a video of the principal, Juanita, and a couple of the teachers showing off the “new” furniture.  It was very heartwarming to see their enthusiasm.  They also sent pictures, along with stories about who received various donations.

Firemen from the local fire department came to help unload, as well as to provide first aid to anyone who might get hurt.  When the chief saw the exam tables, he asked where they were going. Graciela, the contact in Pinalejo, told them, “to whoever needed them.”  The chief replied, “We do.” They were grateful to take a delivery unit, an exam table, and a desk. Graciela explained, “this equipment was a blessing because they assist women in urgent deliveries and people who are injured when they don't have access to a hospital for lack of money.”
​
A couple days later, Graciela delivered an exam bed, a delivery unit, and a baby scale to a maternity and emergency clinic in San Marcos, a rural town 30 miles from Pinalejo. One of their delivery units had just broken down. Graciela wrote, “They were so happy to receive this equipment, also very thankful for this donation.  This small community clinic assists about 4 or 5 deliveries during the day and some at night, as well as emergencies, home accidents, car and motorcycle accidents.  They charge $10, if the person can afford to pay.” It was a blessing to be able to assist a facility that provides such valuable care to those who need it, regardless of their ability to pay.  ​The school in Pinalejo started the academic year with 25 new students, raising the total to 150 students. Even with the increase, after the donated desks were set up in the classrooms, they had some old, but still usable, extra desks they then donated to small rural schools that educate 20-25 students each.  When the school year began a few days after the donations arrived, the students and their families were ecstatic to begin a new year with new furniture.

T​hrough the teamwork of Dream Big Honduras and CHOW, both organizations had the opportunity to most effectively distribute the desks, educational materials, medical equipment, and additional supplies to the community of Pinalejo, as well as neighboring areas. CHOW members are thankful to have had this opportunity to be involved in such a successful partnership that benefited so many.

FEEDBACK FROM RECIPIENTS
A note received several years ago from one of the recipients of desks in Central America stated, “Kids in remote areas of Panama, Bolivia, Nicaragua, Guatemala, etc, are sitting on desks that will last many years thanks to the hard work and dedication of members of CHOW.”  A note from Jorge Tapia, a representative at the Bolivian Embassy, said, “The people from the incredibly humble and poor Bolivian Altiplanos communities are extremely grateful for the donation.  It was a great surprise to the teachers, students and parents.  The children were very, very excited when they received the individual student kits- these are precious items to them.  They have never seen anything like that in their lives.”

SHIPMENTS TO PANAMA
In May, 2018, C.H.O.W. partnered with Beyond the Horizons, a program with the U.S. Department of Defense, to send two containers of bicycles, sporting equipment, school supplies, and desks to schools in rural areas of Panama.  Maplewood Local School district generously donated 200 desks from the closed Greene Elementary School.  C.H.O.W. volunteers were grateful to load those desks directly from the school onto the container.  Later that day, a second container was loaded with desks previously purchased from the auction at Beaver Local Schools.

CENTRAL AMERICAN PROJECTS DISCONTINUED
On April 25, 2019, C.H.O.W. sent its last shipment of desks and school supplies to Guatemala. The desks sent in this shipment were gathered from Champion Elementary and Middle Schools, as well as Lakeview Elementary and Middle Schools, and the packed load contained 186 student desks, 4 teacher desks with chairs, 15 boxes of school supplies, 20 boxes of teacher supplies, 8 bicycles, and other miscellaneous items to support the students’ education.  This shipment was in cooperation with an exercise performed by SouthCom of the Department of Defense, which included building one medical clinic and three schools - one elementary and two vocational.  Closing ceremonies were held July 27, 2019, at which time the schools were handed over to the local communities.

Due to a shortage of volunteers and the overwhelming amount of work required to prepare shipments that equip new classrooms in Central and South America, C.H.O.W. is discontinuing its work with the Department of Defense.  The current volunteers have done an outstanding job and committed admirable time and effort, but the workload and paperwork have become too complex and demanding for such a small group to handle.  We are proud to report that, over these past 20 years, C.H.O.W. has sent 7,972 student desks in 42 shipments to 14 different countries.  However, going forward, C.H.O.W. will focus on its work more locally in Appalachia with Grahn School Community Center.

Over the past 20 years since its inception, not only did CHOW and its volunteers save space in the landfill for future generations of Americans, they also impacted the lives of people in faraway countries by giving them the equipment necessary for a good education.  The lives of the volunteers were enriched also.  Relationships were formed, cooperation among organizations was established, and faith was deepened.